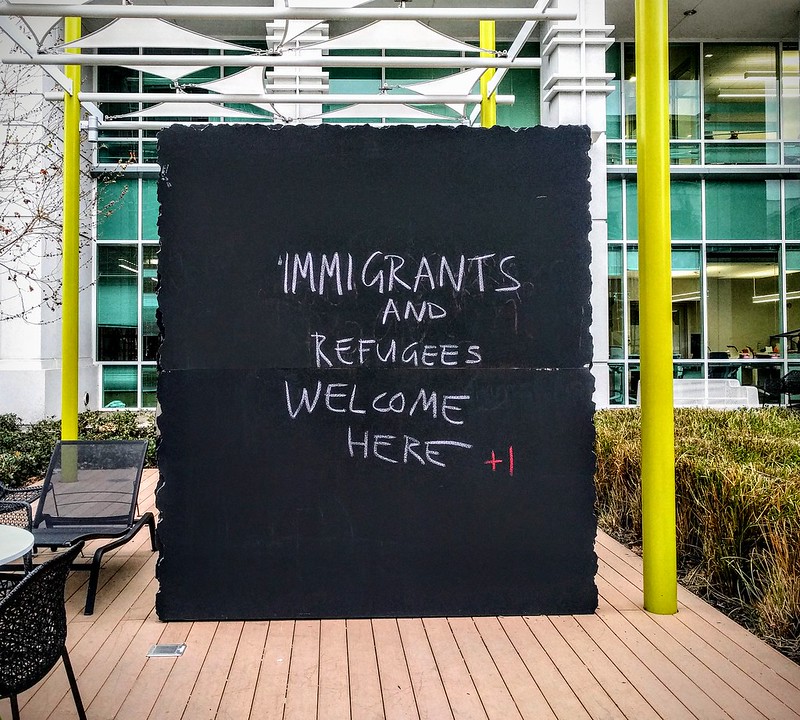 Ironically, anti-immigrant sentiment is not new in this nation of immigrants. In 1880, the Irish were accused of bringing in cholera, Italians of polio, and Chinese immigrants were blamed for bubonic plague. Phil Gingrey, a physician and retired Congressman from Georgia, accused migrant children of bringing measles, dengue, small pox, and Ebola across the Mexican border. These are completely unfounded claims. The result is to stir up fear in an uninformed population that suspects many immigrants are here illegally and are dangerous.

Muslims in particular face discrimination. The distinctive head scarf or hijab that many Muslim women wear makes them an easy target of jeering and suspicious looks on the street and in stores. Names like Mohammed and Hussein prompt bullying in schools. The attacks by fundamentalist Muslims in Egypt, Mali, Nigeria, France, and in the U.S. promote an atmosphere of hatred and fear. On December 6th, President Obama was forced to call Americans to their founding values of religious tolerance and inclusion.

This is the atmosphere in which many refugee families must attempt to adjust to American life. The stress and isolation families endure compounds the other issues from transportation and language barriers, to depression. This climate makes it important to check in with immigrant families about the impact of events and the national mood on their mental health and feelings of safety. Some of my older patients admit cancelling appointments if they feel it is unsafe to travel on public transportation; this may lead to delays in diagnosis and treatment. Others acknowledge that generalized anxiety has affected social events and added weight to the burden of chronic depression or PTSD. Talking to patients about their families, their plans for communication and safety in the event of someone acting out, about advocacy groups in your area, and about your willingness to engage this discussion will create a safe place to unload these gnawing concerns.

Many of our colleagues and employees are someone else’s patient, and it is incumbent on health care facilities and systems to ensure their workforce feels supported, welcomed, and at least safe at work. Reviewing reports of hate crimes in the news and the impact of anti-immigrant and many other discriminatory sentiments and behaviors, regularly with all staff, is the first step toward crafting policy and operational measures to address workplace safety and inclusive institutional culture.

We like to think Medicine is apolitical, a democratic institution that represents the best in our society ….for this to be true it requires not only vigilance but action.